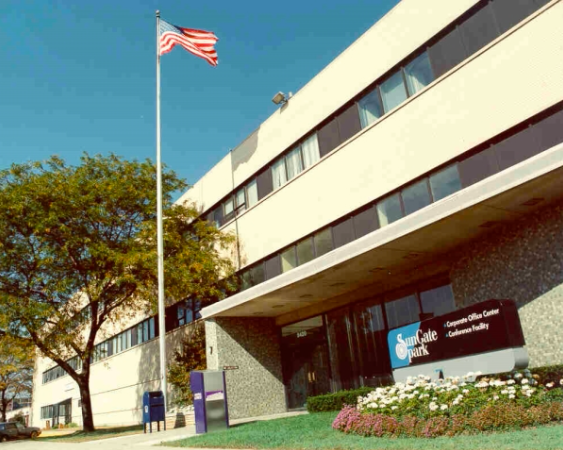 Moving due west from Lake Michigan, through The Loop, and then past the gastro-fame of the West Loop, you find yourself in the west side of Chicago. Even further out, past the up-and-coming areas of East and West Garfield Park, you’ll eventually cross over South Cicero Ave and enter a more industrial part of town. This region of the city, nestled between popular Chicago neighborhoods and the western suburbs, is the area home to SunGate Park.

SunGate Park has inhabited west Chicago for over 20 years. Prior to SunGate, The Sunbeam Appliance Co. occupied the site for more than 40 years before closing their doors in 1982. Shetland purchased Sunbeam, also known as “The Beam”, a few years later, in 1985, with plans to refurbish.

After the acquisition, Shetland moved quickly to declare the site a State Enterprise Zone. Once Chicago’s Department of Economic Development and the State of Illinois gave them the green light, Shetland was able to repurpose the former plant into individual spaces carved out for small industrial tenants.

In 1989, 4 years after Shetland’s acquired the Park, over 96% of SunGate’s office and industrial spaces were leased. Many small technology companies, like Continental Plastics, were attracted to the space because they were eligible for State Enterprise Zone tax breaks and favorable financing. The total occupants included more than 40 industrial firms with 1,000 full-time employees.

Shetland developed the park with the intention of meeting varying functions of businesses of different sizes and industries. Spaces range from 600 square feet to 100,000 square feet, catering to the needs of both small and medium-sized businesses. Tenants across varying industries like: Assembly, Pick and pack, Warehousing, Apparel manufacturing, Printing and Metal fabrication are all attracted to the park’s spatial flexibility and expandability. With a total square footage 1.3 million square feet, there’s plenty of space to go around.

SunGate Park is also conveniently located in proximity to both Chicago’s city center and outlying suburbs by car or public transit. The industrial park is a quick exit off of interstate 290 (near exits 23A and 23B), sitting right on the well-traveled intersection of Roosevelt, Central and Laramie Avenues. The park is also only a mile away from the Cicero-Forest Park of the blue line el train and 20 minutes away from both O’Hare and Midway airports.

Shetland Properties’ developed SunGate Park with the hope of creating flexible working spaces that cater to businesses across a number of industries. With a prime location, seemingly boundless square footage options, and amenities like an onsite property manager, 24-hour security, Internet availability, and abundant parking, SunGate Park is guaranteed to attract tenants from all around the greater Chicago area.